After falling behind in the top of the first, Bridgeport struck back hard, with four runs. Year of the Hamster batted in a run with a triple, followed later in the inning by a three-run clout by Tyrone Palmer.

In the bottom of the second, it was another RBI triple, this time by Resis, driving home a run. Keelin Billue upped the lead to 6-1 with a sacrifice line out.

Lurker Laura had a rough start, retiring as many batters as she allowed extra-base hits (four). The good news is that this six-earned debacle will be wiped off of her baseball card once the regular season begins.

Katiesphil arrived to put out Laura's fire, and finished the game up admirably. His 6 2/3 innings of three-run ball were marred only by an RBI single from Ashley Sanders in the fifth and a two-run homer from Billue in the sixth. KP also served notice on the Hit Men's free swinging, starting his first full inning of the game (the third) by hitting both Sanders and Brett Ballantini with pitches.

Black threw seven innings of one-run, seven-hit ball, with seven Ks and two walks. Chrystal O'Keefe moved over from third base to throw the scoreless final two innings that secured the win.

Red Line's only run came in the first, when Luke Smailes led off with a single and steal of second base. Mitch Ransdell, who was the only Go-Go with more than a single hit in the game, drove home Smailes with a single. 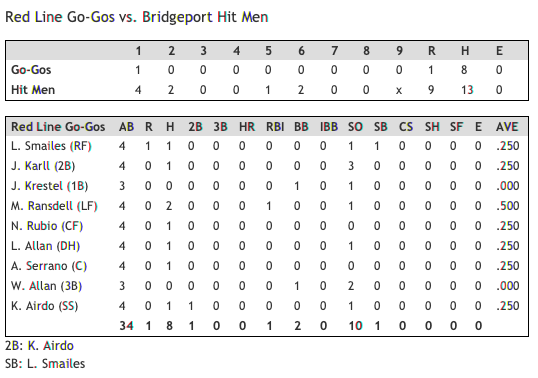 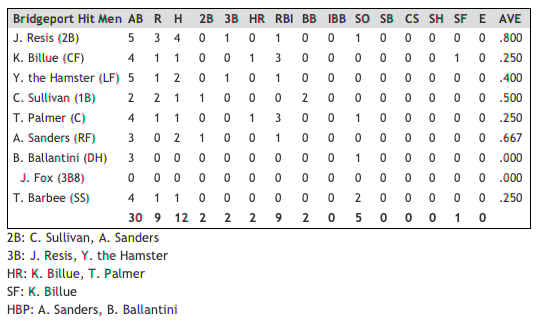 As conceived right now, our Lockout League will consist of two teams rostered by SSS writers and supporters. Joining us in league play will be the Chicago White Sox and the Glendale All-Stars. The All-Stars are made up of the top talent in the White Sox farm system. There is a chance that the two SSS teams will divide back up into four, but for now we'll start with two 28-player squads.

If you are interested in participating in the league, take a look here.